What Are Trays and How Are They Used in Process Plants? 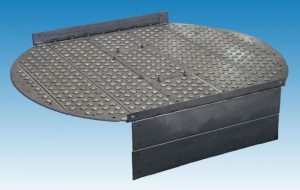 Trays are separation devices used in process plants, most often in distillation towers. The tray column is one the most widely used types of distillation columns. It is also at times referred to as a plate column. The number of trays and stages in the column is designed for the desired purity and difficulty of the separation process. Height of the column also determines the number of stages.

How Trays are Used in Process Plants

Liquid flows down the column and across the trays after the liquid enters in crossflow or countercurrent flow. A reboiler located at the bottom of the tower separates the stream into a vapor that returns to the column as well as creates a liquid product stream. The vapor travels upward through the trays and makes contact with the down-flowing liquid stream. This process allows the separation to occur. Vapor enters into a condenser at the top of the column. The condensed stream is split into an overhead product stream, or the distillate, along with reflux stream that returns to the column’s top.

Trays are used as a sort of holdup for a portion of liquid through which vapor flows in order to achieve vapor-liquid mass transfer that is needed for separation. A crossflow tray uses liquid that travels sideways across the tray and into a vertical downcomer. Vapor passes up through holes or passages in the trays and across the flow of liquid.

Countercurrent trays, also known as dual-flow trays, do not use a downcomer. As a result, the upward flowing vapor and downward flowing liquid must compete for passage through the tray holes. This is why crossflow trays are used more often in commercial practice, due to their wider operating range and higher separation efficiency. However, some modern high-capacity trays do use a countercurrent design.

Other tray options to consider are:

Tower internals can be comprised of trays, structured packing, or random packing – each with its own benefits and drawbacks. Trays are the favored choice in:

AMACS is a process internal equipment manufacturer who can replace in kind equipment as well as custom engineered solutions, including trays, structured and random packing. Feel free to call or e-mail us with your requirements to get a quick response!

« What is Structured Packing and How Is It Used in Process Plants? Mist Eliminator Market Expected to Continue to Grow »
I want to