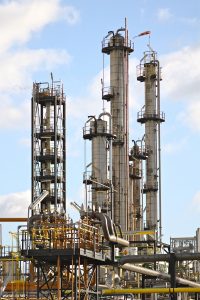 Flooding in a distillation column can negatively impact a refinery in performance and profits. The flooding can downgrade the product draws, reduce crude charge, and even damage the column itself. However, it can be difficult to identify the cause of the flooding. A wrong diagnosis can be just as hazardous and leads to more delays in production. Below, we will help you troubleshoot flooding in your distillation column.

Distillation is a complex method of separating two or more mixtures based on differences in component volatility using a boiling liquid. As a result, the process of distillation can be very energy intensive and may contribute up 50% and beyond of a plant’s operating costs. Therefore, owners and operators have a vested interest in keeping distillation columns operating as efficiently and reliably as possible. Any kind of flooding, vapor, intrusion of water, or any other substance can ruin the entire process the column was designed for.

Flooding is usually caused by an excessive vapor flow. The result is liquid being trapped in the vapor and eventually into the column. Increased vapor pressure can also back up liquid in the column’s downcomer. Flooding can often be detected by sharp increases the column’s differential pressure or sharp reduction in the efficiency of the separation process.

One example of flooding in a column is when the vapor flow becomes rising bubbles as part of the continuous liquid phase. This keeps the liquid from properly flowing down the column  to the bottom through the trays, packing, etc. The rising bubbles drag the liquid upward causing a stop in the distillation column’s separation. The feed stream then can begin to look like the top and bottom products.

Occasionally, excessive control loops can keep the flooding from being detected. Distillation columns can use numerous control loops that run automatically to control items such as column pressure, feed rate, reboiler heat duty, reflux ratio, various temperatures, product compositions, and more depending on the process. It is a common practice to simplify this operation to avoid flooding. This is accomplished by the elimination of the feed stream into the column with the distillate and bottom product streaming out of the column. The alternative sends all the condensed top product back down as liquid reflux. The bottom product is then boiled as vapor back up the column by the reboiler. This operating mode is considered to be “100% reflux mode” or “total reflux.”

How to Prevent Flooding in Distillation Columns

One of the best ways to prevent distillation column flooding is to have the correct configuration in the first place including structure, packing, trays, reboiler, control loops, feed inlets, etc. It is also essential to maintain all components as needed by the process.

Additionally, there are devices that can help detect and diagnose flooding in columns. One such device is called an intelligent differential pressure transmitter. They can be installed on the distillation column’s packing section. The data acquisition system is designed to log the pressure signal at the same rate as sampled within the transmitter. It is possible to determine optimal configuration settings for flood detection by logging the raw-sampled process data. For example, the device can measure the flood rate when the reboiler duty is raised.

The AMACS team lead the industry in providing mass transfer and separation process internals for distillation columns in a variety of industries. Contact us if you need our help to avoid, detect, and prevent flooding in your columns.